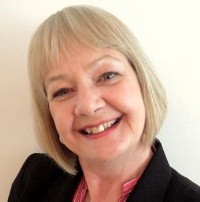 Sally was born and brought up in Yorkshire and trained at the Guildhall School of Music and Drama, where she was awarded the School Prize for character acting. She began her career working for Sir (later Lord) Bernard Miles at London’s Mermaid Theatre and followed this with several years in Repertory theatre, playing everything from Dowager Duchesses to Dotty Maids, Nuns to Convicted Murderers! Her most recent theatre role was as the iconic Betty Marsden in a national tour of Round the Horne Unseen and Uncut.

She has made literally thousands of BBC radio broadcasts and was awarded Radio Comedy Performance of the Year at the Radio Times Comedy and Drama Awards in 1992 for her work on Radio 4’s Weekending, a programme on which she eventually worked for a total of fifteen years. All her professional life she has been a regular contributor to both comedy and drama for BBC radio and most recent productions include Alistair McGowan’s Continuity, Ed Reardon’s Week, two series of When The Dog Dies, with Ronnie Corbett and two series of Lucy Montgomery’s Variety Pack. She has also voiced many OOV characters on BBC1’s Outnumbered.

Sally’s experience in animation work is extensive, including three series, respectively, of the mega-successful Animals of Farthing Wood and Noah’s Island (Telemagination for BBC) – for both she created many of the major characters. She  also featured in Dennis and Gnasher, (ITV), Pettson and Findus, (BBC), Mr Bean with Rowan Atkinson, (Tiger Aspect for ITV), Pongwiffy  with Dawn French and Jennifer Saunders (BBC) and Iconicles (CBeebies) She voiced many real-life personalities in the award-winning BBC2 series, Double Take, (Tiger Aspect).

Sally’s many TV credits include Coronation Street, Casualty,  Born and Bred, The Ruth Rendall Mysteries, Harry Hill, Wogan’s Guide to being an Old Geezer, Little Britain, That Mitchell and Webb Look, Ronni Ancona and Co and three series of Alistair McGowan’s Big Impression to name but a few. Feature films – Ghost Story, It Shouldn’t Happen to a Vet and Boston Kickout.

Hugely experienced in the world of voice-overs, Sally must have covered it all! Upmarket, downmarket, hard sell, soft sell, dubbing, commentaries and documentaries, as well as being able to offer a wide range of accents, characters and impressions.

And don’t  panic if your script isn’t finalised until the eleventh hour…..sight-reading presents no problem!