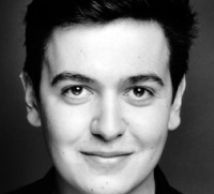 Tom trained at Arts University College Bournemouth, graduating in 2008. His work as an actor since then has had a focus in comedy and music. Having been a keen musician and singer for most of his life he used those skills to break into the ever popular Actor-Musician scene.

He performed with the comic institution, NewsRevue, both in London and in the critically acclaimed Edinburgh Fringe show, and this experience sharpened his character work, both physically and vocally.

Tom started working professionally from an early age, which has given him experience in every medium - from voice work, to film and television, and even a stint in the West End, in Oliver.

During these years, voice work was a regular feature. Tom worked on his first radio play at the age of 8 for the BBC (Theo the Bear). He started commercial voice work when he was 11, voicing for products such as Oil of Olay, Toblerone and Ready Brek, as well as for various charities. He gained valuable experience in ADR for film and television, and voiced numerous characters for English language courses. While at university he used his skills to work with the Film, Animation and Radio courses, providing voices and narration for their major projects.

His long running experience has given Tom a confidence and versatility on the microphone beyond his years, allowing him to deliver a great range of ages, styles and characters.