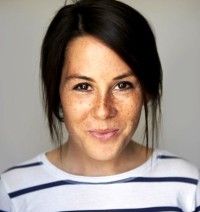 Claudia Grant has worked both in Theatre, Television and Audio since graduating from LAMDA in 2012.

Her film and television credits include BAFTA nominated Drama An Adventure In Space and Time, Being Me, Doctors, The Bill, Invisible and Seeing Things.

Her theatre credits include Juicy and Delicious at the Southampton Nuffield Theatre, Spring Awakening with Headlong, West Yorkshire Playhouse, and Southampton Nuffield Theatre, Scarborough at the White Bear Theatre, A Beautiful Recitation of Piat the Whitechapel Theatre, Knives in Hens at Camden People’s Theatre and The Lover at Finborough Theatre. She also played Polly Chapman in the highly acclaimed West End production Harry Potter and the Cursed Child.

Her voice work to date includes radio plays such as The Cloisters of Terror by Big Finish, educational content for Pier Productions and recording for Amazon. She has ADR / dubbing experience in animation work and returned to Big Finish for a Doctor Who audio special of An Adventure and Space and Time.