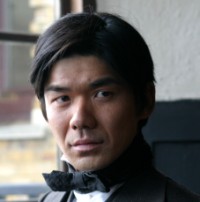 Dait is an experienced Japanese actor and voice over artist, who trained at Ecole Philippe Gaulier, Rose Bruford College, London, and attended the Suzuki Method Workshop. He has a range of deliveries - from a soft, rich, enveloping narrative read, to crazy, high-pitched characters and vocal age ranges of 5 through to 60.

Dait is fluent in both Japanese and English and can speak Japanese with a Standard, Tokyo or Nagoya accent.